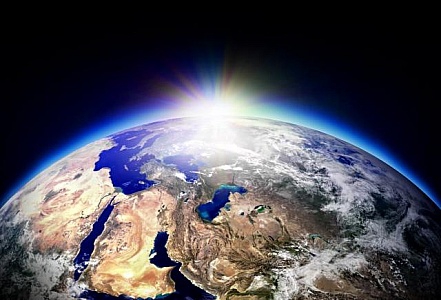 Why should Christians, or anyone, for that matter, care about the age of the earth? God is God, regardless of whether he created the heavens and the earth in 6 days or 6 billion years – right?

I use to have no opinion about the earth’s age.  Honestly, I didn't care.  I figured if Christian clergy and scholars were accurately communicating the truth of the Bible – that God created all things – it didn’t matter how he did it or how long he took.  I also assumed that since many scientists supported the notion of a very old earth and the companion theory – evolution – that they must be telling the truth.  After all, an article referencing the old age of the earth appears almost weekly in major newspapers and media of all types. Why would any major publication print false information?

But then I became of follower of Jesus Christ, and I devoured everything I could about the Bible.  I wanted to know the truth about our creation, our time on earth as humans, and what our future, with or without God, would be like.

When I plunged into the scriptures, Christian commentary, and apologetics, I found the belief in an old world is a new development.  The first-century Jewish historian Josephus wrote that the Jews of his day believed that both the first day of creation and Adam's creation were about 5,000 years before Christ. Josephus' assertions were based on a consensus of scholars and academics of his time and before.  Using Josephus’ baseline estimate and today’s date, the earth would be about 7,000 years old.

I was puzzled why scientists had changed their view. Why should they care if their only focus is on science – and in the case of the earth’s age - historical science that relies on examining and interpreting matter on earth and the wide range of matter and energy in the atmosphere and space.  As I continued to dig, I soon learned that the age of the earth is very important for the following reasons:

1. The Truth Matters. Facts matter, and whether they deal with the age of the earth or the veracity of the Bible or any other issue, seeking verified facts should be the foundation of a person’s quest for truth. An interpretation of the Bible should not be twisted to fit man-made theories or secular narratives.  When you examine specific facts that purport to support the supposition that the earth is billions of years old, they become very shaky when closely examined. Conversely, facts presented to support the contention that the earth is around 6,000 years old withstand scrutiny in my opinion.  Some examples:

- Carbon 14 is an element in our earth and in our atmosphere that dissipates and completely breaks down over time. C-14 has a half-life of 5,730 years.  No C-14 should be found in coal or diamond deposits estimated to be hundreds of millions of years old or older, yet carbon-14 is found in virtually all coal and diamond samples tested.  How could that be?  The only logical explanation other than defective testing equipment is that the earth is not billions or millions of years old but thousands.

- The formation of thick, tightly bent rock strata with no signs of melting or fracturing that look like a cross-section of ribbon candy should be impossible. Such rock formations could not form slowly over millions or billions of years of gradual deposits of matter from the earth's surface. While their formation during hundreds of millions of years would be impossible, they are consistent with an extremely rapid formation during the biblical Flood.

- The decay in the human genome resulting from multiple slightly harmful mutations added each generation is consistent with the origin of several thousand years ago.

- The presence of intact dinosaur blood cells, blood vessels, and proteins found in fossils are not compatible with their supposed age of more than fifty million years old, but make more sense if the fossils are much younger. Organic tissue should completely disappear by a million years.  Theories that iron in the blood somehow preserved the tissue are just that – theories by evolutionists who want to deny the obvious.

- Geologists who subscribe to the old earth theory postulate that our rock and soil layers in the earth's crust result from the gradual deposits laid down slowly over many millions or billions of years.  If that were true, no fossils of intact organic plants or animals should be found protruding through multiple strata of rook, as natural decomposition would destroy them in a matter of years or much less.  However, polystrate fossils, for example, broken vertical tree trunks in northern and southern hemisphere coal that traverse many strata indicate rapid burial and accumulation of the organic material that became coal. The process must have happened quickly, not over many millions of years.

- The amount of salt in the world’s oldest lake, Lake Baikal, contradicts its supposed age of 25 to 30 million years and suggests an age consistent with its formation after Noah’s Flood.

- The amount of helium, a product of the decay of radioactive elements retained in zircons (a type of mineral) in granite, is consistent with an age of 6,000 ±2000 years, not the alleged billions of years.

The preceding is only a small sampling of physical evidence consistent with a planet less than 10,000 years old.

2. The Biblical text is accurate. The age of the earth is directly tied to the book of Genesis and the veracity of the Bible. While some believe the earth's age is in dispute, other Christian scholars contend that Genesis, verses one and two, unequivocally describes God's acts of creation in 6 twenty-four hour days. Some claim that a day described in Genesis could be a thousand years, as quoted, but the text of Genesis is very clear that each day consisted of the morning, evening, and night. Specifically, the concept of a day and night constituting a single twenty-four-hour day is easy to understand, and interpretation is not required.

Do other parts of the Bible confirm the concept of God's work of creation in 7 days?   Yes. In Exodus 20:9-11, we read:  "Six days you shall labor, and do all your work; 10 but the seventh day is a Sabbath to the Lord your God. On it you shall not do any work, you, or your son, or your daughter, your male servant, or your female servant, or your livestock, or the sojourner who is within your gates. 11 For in six days the Lord made heaven and earth, the sea, and all that is in them, and rested on the seventh day. Therefore the Lord blessed the Sabbath day and made it holy.”

3.  Death before the fall. God's proclamation in the scriptures is another reason a six-day creation is essential to Christians.  God created man on day six, and when he was finished and examined everything he had made, he declared it (his work) "very good."

If God had created the heavens and the earth billions of years before he created Adam and Eve, the animals on the earth would have died through aging, disease, and the stronger predators devouring the weaker species.  Death and disease would have wracked the earth for many millions of years, and if man had slowly evolved from single-celled creatures, he too would have subject to illness and death.  None of man's existence would have been "very good" from God's perspective.

Conversely, the Bible states that disease and death did not enter the world until after Eve and Adam sinned.  Their sin and the resulting curse on man and the world necessitated Jesus Christ's incarnation as a man and his substitutionary, sacrificial atonement for man's sin. Jesus Christ would not have been needed to redeem a fallen world since it already had traits of being fallen from the very beginning.  In other words, the gospel would be false if death was a fact of life before God created man because you can't redeem a fallen world if it was initially created that way by God.

5. Jesus Christ confirms the accuracy of Genesis.  Jesus was a real young-earth creationist who made the case when he stated in Mark 10:6 – "But from the beginning of creation, 'God made them male and female.'" He didn’t say, “Man came to be after many millions of years of evolution and development.”

So how old is the earth?  No one knows for sure, but based on a careful analysis of the Bible – in its entirety – most scholars believe it’s about 6,000 years old.  One explanation for the apparent aged appearance of the earth is that God made it look old when he created it. In other words, God created it in a mature state, just as he created Adam as an adult male and not an infant.

Our conception of the age of the earth is an essential underpinning of our Christian faith.  It determines how we look at the past and how we envision the future. It also has a direct relationship with our belief in the gospel and the mission of Jesus Christ.  If Jesus believed in the literal meaning of the Old Testament, we should as well.

More importantly, if we don't accept the literal meaning of Genesis and fail to give credit to Father God for his work, we are disrespectful and ungrateful.  How can we honor and worship God if we don't acknowledge all that he has done for us?

From a human perspective, the answer to the question about the earth’s age may disquiet you when faced with the avalanche of old age earth and evolution commentary and scholarly writings.  What’s the motivation for people to affirm an old age for the earth?

A combination of several factors coerces compliance.  Peer pressure, groupthink, and economic rewards or punishment incentivize scientists and scholars to go along with a shaky theory at best.  Suppose one applies for a teaching position at a secular college or university and communicates his or her agreement with the Bible's account of creation. In that case, one's chances of being hired are slim and none.  Only those who are securely tenured or safe economically can take a stand and confirm the truth.

On a related note, over 1,000 renowned academics who have serious reservations about the scientific validity of the theory of evolution have placed their name on a proclamation entitled, “A Scientific Dissent From Darwinism.”  Their declaration states, "We are skeptical of claims for the ability of random mutation and natural selection to account for the complexity of life. Careful examination of the evidence for Darwinian theory should be encouraged.”

Evolution, to be viable as proposed by its adherents, must have an earth that is billions of years old for complex, intelligent life such as ourselves to spontaneously appear through random interactions of chemicals on a primitive earth.  If evolution is not viable, then the need for an old earth withers away.  But since both are still touted as the world view of choice in secular society, we followers of Jesus Christ must continually point to facts and science and make our case.  The faith of many would-be believers hangs in the balance.

I hope you keep an open mind and look at all the evidence of the earth’s age and question everything!  If you’d like more information, I recommend Answers in Genesis (https://www.answersingenesis.org), Creation Ministries International (www.creation.com), and the Institute of Creation Research (www.icr.org).  Some of the information cited above came from the aforementioned fine ministries.

You are not alone if you trust the Bible to be accurate and true.