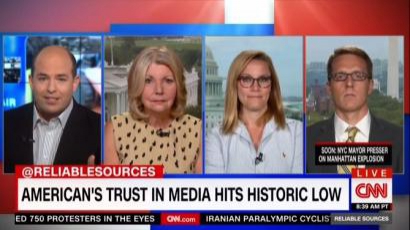 Seriously?  I’m not an ordained pastor, but after spending a number of years trying to find my spiritual bearings, I’ve made a few discoveries.  I’ve looked at a lot of Christian teachers and ministries, and I began to recognize the traits of some of the best and most effective.  At the same time, I began to suffer from the onslaught of fake news that has infiltrated the media and plagued all of us.  Surprisingly, I saw some similarities with ministries that have strayed from sound doctrine but none with ministries that have stayed completely true to the Bible .

Say What?  Yes, I began to see that fake news and effective ministries employ principals that are polar opposites. Sound ministries give you honesty and clarity with compassion that motivates you to act - exactly the opposite of what you get in most of the media today.

Honesty.  One element most notably absent in much of the discourse around the world today is honesty. Most of the media no longer labors to bring unfiltered, uncensored, and unvarnished facts to the public forum these days.  Instead, we get pseudo news carefully selected and structured to support a particular narrative – to the exclusion of the rest of the story.

Whether in print, on television, or in social media, we get information that’s spun, hyped, and laced with speculation and in many cases outright fabrication.  Much of the pseudo news is designed to smear or malign a particular target or just entertain with salacious facts mixed with fiction.  As Peter Finch said so famously many years ago in Paddy Chayefsky’s film, Network, “television is in the boredom killing business.” His salient observations describe the other forms of media as well.

I can think of no commodity more important to any ministry than the truth.  Not the partial truth but the whole truth without qualification, spiritualization, or rationalization. Where do we find the truth?  Of course, God’s inspired word – the Bible.  Regardless of what the culture’s trends are, the trending TV shows, or the latest “reinterpretation” of the scriptures, I believe every ministry must do everything in its power to stand on the solemn and literal word of God.

Clarity.  A tenant closely related to honesty and truth is clarity.  Those who wish to obscure, deflect or conceal the truth often engage in deliberately vague and misleading discourse. Again, the fake news industry is refining obfuscation and deliberate misinformation into a science.  The hapless consumer must now pick through multiple news sources to get even a semblance of the truth.  I learned long ago that if you want an undercover asset to fool a criminal cartel, you must train the asset to mix truth in with fiction when explaining why he or she wants to participate in a criminal enterprise. When you start with a core of truth and then twist it, you can fool a lot of people.

Communicating in clear, concise language makes the task of distorting the truth more difficult.  Direct answers to direct questions reveal much and conceal little.  When Jesus answered questions or addressed listeners during his days of ministry on earth, he was honest, frank and crystal clear in his language.  Only when delivering parables was he sometimes vague to mislead those who rejected him.

Compassion:  Biblical truths, when delivered without love can be dry and brittle.  It does not revive and refresh – it smothers.  I cringe when I see street preachers carrying large placards and yelling through bull horns that everyone is going to hell.  While their pronouncements are unfortunately somewhat true, the potency of the message is dead on arrival.  The listener is so jarred by the lack of compassion in the message that it’s shunned or ignored.  If only the street corner preacher used compassion and empathy to try and connect with a fallen world.  It may not always work, but trying to inform people of a dire consequence while staying emotionally engaged through love for fellow man is a model we should all consider as an imperative.

When people lie, they usually lack compassion for the recipient of their falsehoods.  An exception would be a parent or elder who feigns admiration for a young child’s artistic skills. Agreement with a youngster’s pride in their artwork is an act of love – love for the artist and not necessarily the messy finger-painted art.  A young child would not understand a parent explaining why their painting masterpiece was not ready for display at the Louvre.

Conversely, fake news perpetrators care only about their own twisted motivation and insidious goals.  Many are serving masters who hire them to concoct narratives that are constructed out of cherry-picked half-truths.  Fake news is made all the more potent and insidious because a good portion of it is made successful through the exploitation of many consumers’ digital habits. People accept the pop-up headlines because they don’t have the time to confirm or refute through more research.

Unfortunately, the fake news problem will only grow worse.  One solution is for Christians to counterbalance the avalanche of fake news by carefully crafted and wholly truthful articles and comments about the events that take place in the world today.

What do you think?

This is an informative post. As Jeff noted, honesty, clarity, and compassion are three of the keys to effective communications. Unfortunately, we don't see those elements very often in various media, much of which is truly fake news.