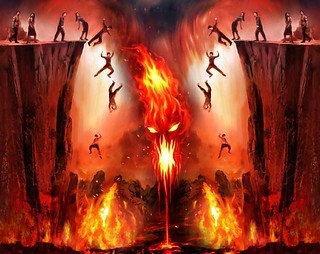 Yes. Hell is a real place.  I feel compelled to share my thoughts because I've discovered a recent book and related articles that claim hell doesn't exist.  They’re not the first to dismiss the reality of hell and won’t be the last, but I urge people not to believe them – they’re deceptive.

But hasn’t hell been relegated to the ash heap of mythology along with organized religion?  No.  Some modern secular scholars postulate that the "concept" of hell is no longer "needed" in contemporary society, but as one sage observer pointed out, hell either exists or it doesn’t. What we need or find fulfilling or logical is interesting, but ultimately irrelevant. Hell isn’t an “idea” or “concept” – it’s a physical location.

The mass media is also playing a large part in accelerating our culture’s rejection of the reality of hell – and God in general.  Anyone who claims that hell is nothing more than a mythical concept gets primetime coverage, while those who try to trumpet the truth are shunned or ignored.

The collective campaign to remove hell from our cultural psyche is having an impact.  The Pew Research Center's 2014 Religious Landscape Study found that roughly seven-in-ten (72%) Americans say they believe in heaven.  At the same time, only 58% of U.S. adults reported believing in hell.

But a careful examination of the evidence will reveal that the Bible is true and hell is real.  Where’s the proof?  In some likely and some unlikely places.

First, let’s look at the Bible.  Many reject the Bible as a factual historical document.  Some claim it's merely a musty old collection of myths written by men.  Others disagree. A growing number of bible experts are discovering that the Bible is a self-authenticating document.  As the late Dr. Chuck Missler so beautifully explained, it’s a carefully crafted integrated message with multiple layers of meaning that must have originated from a source outside of our time/space continuum.

Seriously?  Yes.  Written over 1600 years by some forty authors – many of whom did not know each other, the Bible describes events that came to pass centuries later.  We're not talking about vague, generic predictions that anyone could reasonably guess, but specific graphic descriptions of Jesus Christ's crucifixion, death, and resurrection, as well as many other events.

In 1957, Moody Press in Chicago, Illinois, published a book by Professor Peter W. Stoner, called SCIENCE SPEAKS, An Evaluation of Certain Christian Evidences. In his book, Stoner points out that through his peer-reviewed mathematical computations, he calculated the odds of just eight of the Messianic prophecies in the Bible about the birth, life, and death of Jesus Christ occurring – and they did – was one in 10 to the 17th power.  He also demonstrated that many other prophecies that the Bible made came true, and the odds of their occurrence, as predicted, was astronomical.  The Bible is a book of supernatural origin.

What’s the Bible’s evidence for hell’s existence?  Biblical documentation and, most recently, eye witness testimony provide a substantial body of evidence that can’t be ignored.  Jesus Christ talked more about hell than heaven while he was on earth. The Bible is replete with graphic examples of the conditions in hell, and no amount of grammatical or analytical chicanery can gloss over the gruesome warnings contained in the scriptures.

What are some examples of Biblical warnings?

“Then He (the Son of Man – Jesus) will say, depart from Me, you cursed, into the everlasting fire prepared for the devil and his angels.” Matthew 25:41

“And these will go away into everlasting punishment, but the righteous into eternal life.” Matthew 25:46

“And do not fear those who kill the body but cannot kill the soul.  Fear him who is able to destroy both soul and body in hell.” Mathew 10:28

“And if your eye causes you to sin, tear it out. It is better for you to enter the kingdom of God with one eye than with two eyes and be thrown into hell, where their worm does not die and the fire is not quenched.” Mark 9:47-48

“Let us swallow them up alive like Sheol, and whole, like those who go down to the Pit.” Proverbs 1:12

“Father Abraham, have mercy on me and send Lazarus to dip the tip of his finger in water and cool my tongue, for I am in anguish in this flame.” Luke 16:24

“Let burning coals fall upon them; let them be cast into the fire, into deep pits, that they rise up not again.” Psalm 140:10

“And the smoke of their torment ascends forever and ever, and they have no rest day or night.”  Rev 14:11

“All liars shall have their part in the lake which burns with fire and brimstones.”

Modern-day evidence comes from the eye witness accounts of near-death-experience survivors who’ve come back from clinical death.  Additionally, those who’ve experienced out-of-body journeys or vivid visions provide a growing body of corroborating eyewitness accounts that should give even the most jaded atheists pause.  Some, compelled by a sense of urgency to warn others, have written books and gone on speaking tours. Their unequivocal message: I know that hell exists because I’ve been there.

To get the information from the horse’s mouth, I recommend that concerned individuals read the accounts of near-death experience and out-of-body experience witnesses and judge for yourselves.  Start with Bill Wiese’s 23 Minutes in Hell.  Howard Storm‘s, My Descent into Death, and Bryan Melvin’s A Land Unknown: Hells Dominion are both excellent testimonies from former atheists.  For a more balanced view of both heaven and hell, Richard Sigmund’s My Time in Heaven, Jim Woodford’s Heaven: An Unexpected Journey, and Donna Rigney’s Divine Encounters have enough graphic detail to give you an idea of what will lie ahead for some.  For a scientific review of the subject, Dr. Jeff Long’s God and the Afterlife is an excellent resource.

Do any of the NDE or out-of-body witnesses provide unique observations that corroborate the Bible?

Yes – many.  In his book, 23 Minutes in Hell, Bill Wiese provides a vivid example on pages 9 and 10 of the chapter entitled The Cell:  “As I stood outside the cell, I actually felt the darkness…it was though the darkness has its own power…I looked off to my right and could faintly see flames from afar that dimly lit the skyline…The flames were intense, but the darkness seemed to swallow up the light."

Hell is described as “gloomy darkness” in Jude 6 yet “an eternal fire” in Jude 7.

Witnesses give testimony under oath in local, state, and federals trial courts nearly every week about events they've participated in or witnessed. Their accounts are given vigorous cross-examination so that the deciders of fact, the judge or jury, can determine whether their testimony is reliable, true, and accurate.

We, as disinterested outside parties, can also receive and evaluate witness testimony in the form of NDE accounts from a variety of witnesses who have no connection with one another.  A review of recorded NDE witness accounts discloses a pattern of events and a similarity of information.  While the anecdotal accounts of a few individuals might be dismissed as mere stories, when many scores of individuals report similar data, it begins to gain credibility.  The number of accounts of those who have visited hell cannot be dismissed as mere stories.

Where exactly is hell?

To answer that question, we must first recognize that we are bi-dimensional beings. Since we inhabit a soul and spirit body that is interwoven into our temporary biological earth suit called a human body, we have to consider that our soul and spirit, which we can’t see, exist in another time/space continuum simultaneously while we inhabit the earth.

For those who reject the concept that heaven and hell can exist in another time/space continuum because science can’t prove that they exist, I recommend they consider for a moment that modern science can’t account for more than three-quarters of all matter in the universe.  Through ongoing research, scientists can infer that a substance called dark matter exists, but they can’t directly observe it.  The origin of dark matter is a mystery, although researchers are attempting to find a source.  Scientists have also determined, through mathematical calculations that one can infer that at least ten dimensions exist. Plenty of space for heaven and hell.

First and foremost, many reject the reality of hell out of fear.  The thought of being relegated to an eternity of horrific torture is more than most people can stand.  To deflect their thoughts from a fate beyond comprehension, they put up a brave front, call on the “logic” of fellow disbelievers, and go through life “whistling through the graveyard.”  Out of sight, out of mind.  Free from reminders of hell for those who reject Jesus Christ, people can go through life, hoping that they’re right while secretly dreading what the future might hold.

Another contributing factor is that in the western world, many are smothered by comfort and have little incentive to consider the potential horrors of an afterlife separated from God.  Most conflate their comfortable standard of living with an imaginary stasis – they believe their present pleasant circumstances are the reflection of how the universe works in perpetuity.

Deniers believe no supreme being would ever mete out justice and consign the apathetic or rebellious to a never-ending existence of suffering. That's not how a rational person could ever conceive of an “all-loving God” behaving.  No need to worry about the fire and brimstone mumbo jumbo – just look around and see that life’s not so bad, and an eternity in hell is just nonsense.

Many can’t fathom that the comfort in this life is a fleeting condition that will evaporate upon death when God will judge us.

Intense fear of hell is a healthy and reasonable response.  We should fear it, learn how to stay out of it, but not let it paralyze us, or cause us to try and reject it with our limited human logic.  God created hell for Satan and his angels, and unless you reject God and Jesus Christ, you have no reason to worry. Claiming that hell can’t exist because it makes no sense for God to create such a place doesn’t negate the reality of its existence.

No one curses God for creating gravity because we need it, yet every year gravity causes severe injuries to more than 2.8 million people through falls. More than 27,000 people a year die from falls. We know that gravity can cause injury or death if we ignore it, yet we go on about our lives without dwelling on its danger or claiming that it doesn’t exist because we can’t see it.

Likewise, we need but instinctively fear fire. Over 1.1 million people a year require hospital treatment for burns, and almost 15,000 a year die in the U.S. from burns or burn-related infections.  Fire is a known danger that we need, yet we admire it when it graces our fireplaces or cooks our food.

Hell is no different.  It exists – with all its horrors – but we know we can avoid it if we humble ourselves, pray to Jesus Christ, confess our sins, and ask him to be our Lord and Savior. We can go on about lives like we usually do while loving Him, trying to do our best to obey Him, and pushing our thoughts about hell to the back of our minds.  One day, it'll all be worth it. Heaven is beautiful beyond imagination and worth the temporary struggles we endure here on earth.

For a more in-depth discussion of near-death experiences, go to https://jeffwaltonbooks.com/blog/35.