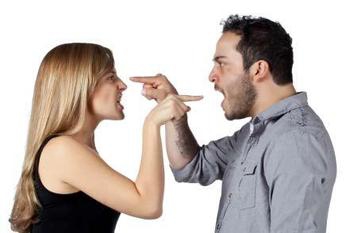 The current state of public discourse. Every day, we witness people verbally attacking each other with a barrage of disparaging labels.  One politician labels the other a racist in an angry rant captured on the evening news.  A guest on a cable TV show labels a current government official a bigot.  A letter to the editor of a major newspaper calls the president a white supremacist. Newspapers now dutifully put labels in their one-line editorials that they disguise as headlines.

Labels injure a person professionally and personally. They've always been around, but why do they seem more prevalent now and what are they?

Labels have become the bane of human discourse for two reasons:  Social media and cable news – both media have provided the amateur and professional alike the method of delivery for any smear, slam, or insult.

Want to pre-empt a debate when you can’t defend your point?  Call a person a name and shut them down.  Signal that they’re not worthy of an honest exchange of ideas because they’re morally, socially and intellectually flawed.  Brand them so they’re excluded from future conversations.

We see and hear the use of labels more often because of the growing number of delivery methods from Twitter to Facebook to 24/7 cable news. Your smartphone has become a digital weapon that can launch countless stultifying labels.

What are labels in today’s wired world?  Modern labels are a linguistic tool borne of today’s sound-bite culture that craves instant gratification and suffers from a digitally-induced limited attention span.  Labels have become a crutch and a substitute for meaningful adult conversations or exchanges of earnest ideas on social media.  Labeling an opponent in the political arena has now become both an art and a science as well as a business.

At the heart of many labels are actual terms that are appropriated by the user and then charged with a much wider meaning – primarily to demean or besmirch.

Terms become labels when their meanings are oversimplified and misapplied.  The purveyors of pernicious labels take complex events or issues with many variables and attempt to fit all of the variables into a convenient one-size-fits-all category.

For example, when the president makes a pronouncement about the much-needed enforcement of a particular law, those who are affected reflexively call him a fascist for doing his job.  The term fascist is often hurled in reaction to a disliked legitimate action and never supported by examples of acts that a true fascist would do – using dictatorial power to crush the political opposition and implement extreme authoritarian policies that exceed any norm of democratic governance. Enforcing laws passed by congress is not dictatorial.

Another example is one of the most widely used labels today – racist.  According to the Merriam-Webster dictionary, a racist is a person who believes “that race is the primary determinant of human traits and capacities and that racial differences produce an inherent superiority of a particular race.”

The term racist would apply to someone who consistently demeaned or attacked, verbally or physically, members of a particular race.  Members of the Klu Klux Klan could be considered racists by the virtue of their past actions.  Their beliefs motivated them to burn crosses in front yards to intimidate blacks, to precipitate the lynching of blacks and to firebomb black churches.

Yet today, anyone who says or does anything unpopular and disliked by a member of a particular racial group is immediately labeled a racist. The differences between a racist and non-racist are manifold, yet in the mind of a label user, important distinctions are irrelevant and trivial.  As columnist Peggy Noonan recently opined, not liking a person’s policy or political positions does not mean you don’t like the person’s color.  In most cases, the person throwing out the label is neither challenged nor admonished when they have misused a term.  The smear is allowed to stand to the detriment of all.

Recent phenomenon. A recently created label of intimidation is islamophobe.  Anyone who in any way questions actions by anyone who is a member of the Islamic faith is automatically labeled an islamophobe.  For example, if a person advocates tightening immigration policies for countries with a history of radical Islamic terrorism and a concomitant lack of internal record-keeping institutions for visa vetting purposes, the person is automatically labeled an islamophobe, regardless of whether they’re motivated purely by national security concerns.  No room for debate because a label automatically declares that a person’s malign intentions are self-evident and non-negotiable.  The goal of the islamophobe label is to make the recipient a social leper who must be avoided and shunned at all cost, less the unprotected public becomes infected by their social malice toward members of the Muslim faith.

The accomplices in all of these acts of moral cowardice are the cable TV hosts and pundits who offer no push back, who demand no clarification or retraction and allow the smears to be repeated to the point that they are accepted as fact.

Newest Label.  The newest label that has coopted a rarely used legitimate term and turned it into a political weapon is the term “collusion.”  If you’ve read any newspaper or watched any news programs over the past two years, you’ll have been constantly reminded that someone who engages in “collusion” is the lowest form of social vermin who places personal ambition above the security of our nation.  According to an endless parade of talking heads, a “colluder” is someone who would knowingly and willfully “cooperates” with a hostile country –particularly Russia – for crass personal gain.

Black’s Law Dictionary defines collusion as “A deceitful agreement or compact between two or more persons, for the one party to bring an action against the other for some evil purpose, as to defraud a third party of his right.”  Collusion is a term most commonly associated with anti-trust cases, or white-collar crime.

Yet, some politician or pundit who was seeking a pernicious label to attach to President Trump’s presidential campaign had an epiphany.  Their internal label maker searched their databanks and found a term that sounded opaquely ominous and vaguely similar to a real national security offense - conspiracy – a term that would apply if a person conspired with others to provide US defense information to a hostile foreign power or worse, to give aid and comfort to the enemy. “Collusion” sounds downright menacing while still being sufficiently vague so that it can be misused with impunity.

And so it began.  Collusion!  That vile label was soon hurled daily and usually hourly as enemies of President Trump found their word-weapon of choice.

Sadly, no push back from the opposition, and those in the law enforcement, counterintelligence, and legal communities continued to use the label for nearly two years. Today, the public is misinformed, and the multiple congressional and federal investigations that were charged with finding evidence of “collusion” by President Trump or his staff have failed to produce any concrete evidence for a crime that doesn’t technically exist.

A word of advice about real conspiracy with a hostile foreign power: When Russian intelligence  has successfully recruited a high-value target such as a presidential candidate or a senior member of their staff, they’ll move mountains to keep it a secret.

Implications of labels for Christians:  Members of the Christian faith are far from immune from the scourge of labelization.  On the contrary, since open season has been declared on anything Christian, pejorative labels have become a regular staple in the arsenal of weapons used by secular activists against followers of Christ.

One of the more common labels is a hater or one who spews hate.  Christians who strive to obey God and His commands are smeared for acknowledging that His inspired word does spell out certain actions that are prohibited.  While the pressure to conform to today’s secular progressive world is great, I urge you to gently and respectfully push back.

Why do people use labels?  The short answer is because they can and it’s easy.  The longer explanation is that our society is devolving into a culture where humility is considered a weakness – no longer a strength.  The days of carefully listening to an opponent and acknowledging their valid points and diplomatically countering any misstatement of facts are essentially over.  People no longer seem to be able to agree to disagree amicably.  The opponent is simply shut down with a searing label, and if that doesn't work, a verbal filibuster is launched.

What to do?  When a person attempts to smear or defame you with a label, you can remain calm and attempt to illuminate the issue and elevate the level of discussion.  If that fails and you find yourself the victim of a labelization attack, you can declare your personal space a “no label” zone.  Don’t respond with labels in conversations and challenge those who do.  If someone calls you a racist or an islamophobe or bigot or whatever, ask them to define the term and cite specific evidence to support their smear.  When challenged enough, some people might think twice before slinging out another label.

We can fight back to discourage the use of labels if we’re strong and consistent.  We may not always succeed, but we can try.  Will you do your part?