23 Minutes in Hell - the Catalyst for Final Departure
Sunday, April 7, 2019 by Jeff Walton 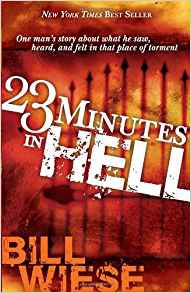 On February 9, 2010, I walked into the NBC News Stand and Book Store in the Jacksonville International Airport, Jacksonville, Florida, and headed to a rotary rack of books. I had passed by the NBC store many times and looked for a particular book that had caught my eye in the past.  In a perverse sort of way, I always looked for the book that I knew was without question a fraud. There it was on one of the shelves in the inspirational book section, 23 Minutes in Hell by Bill Wiese.  The orange and yellow cover of flames stood out.  I was certain the book was a piece of deceptive fiction written by a shameless profiteer hoping to ensnare a naïve and gullible public.

I picked up the book as I had done many times in the past and skimmed through the pages without reading a single word.  For some reason, I was always drawn back to the book, yet I could never bring myself to buy it.  On that particular day, though, a couple of sentences in the introduction caught my eye, so in a weak moment I bought it for my flight to Miami.  No harm I thought, it was a read-and-return book, so I’d have some harmless entertainment on the flight south and then return it for a refund when I flew back in a couple of days.

Since I was an active NCIS special agent at the time, I was carrying a concealed weapon. As required, I sat in the pre-board area of the departure gate to board the flight first and discretely introduce myself to the pilots and flight crew.  I had arrived at the departure gate very early that day, so I had plenty of time to dig into my new purchase in relative quiet.

I started with the foreword and then read the introduction.  It was not what I had expected.  Partway through chapter 1, something clicked inside of me, as if someone had turned on the lights and I could actually see for the first time.  I felt extremely mortal and had a great sense of urgency.  Having dealt with deceivers and manipulators for many years, my gut told me this guy was telling the truth.  How could it be?  It sounded so preposterous, yet my inner voice told me it was true.  How could I have been so blind for all these years?  I thought back to the many sermons and Sunday school lessons I had listened to as a child and had disregarded as meaningless stories that had no connection to real life.  I had turned away from the church and God years earlier and was only now just starting to have second thoughts.  This book shook me to my core.

From that moment on, I was on a quest to find out how I could have been so lost for so many years.  More importantly, I developed a ravenous appetite for more information about similar experiences.  How could someone leave their body and return?  Does the Bible really support written accounts of the likes of Bill Wiese, Bryan Melvin, Howard Storm, Howard Pittman and numerous others?  More importantly, is there really a heaven and a hell, and if so, how do we make sure we make it to the former and avoid the latter?

At the heart of my journey of discovery has been the person and immortal spirit of Jesus Christ. I knew he was the key, but I also knew that I was pitifully uniformed about his true nature and the facts surrounding his birth, life, death, and resurrection.

As a career criminal investigator and foreign counterintelligence practitioner, I had developed a keen eye for liars, fabricators, and provocateurs.  I used my professional optic to sift through the claims, counterclaims and historical records and research to piece together my world view of the fundamental questions of whether God exists, is the Bible really the divinely inspired work of God, and did Jesus Christ really come to earth as an act of love to save mankind from an eternity of separation and indescribable misery.

With no in-depth background in theology, archeology, geology, history, or any of the sciences, I relied on my instincts and previous training and experience to sift through the mountains of writings and research to give me a broad picture of what I believe to be the true nature of man and his creator.

Two fundamental truths have emerged during my examination of the research of countless professionals.  God is real and the Bible is an accurate account of past, current and future events.  Many will dispute both statements, but I firmly believe that a thorough, objective, and neutral examination of the voluminous amounts of evidence available today will lead an honest person to the same conclusion.

I reduced the essence of my research into a presentation of facts framed within a fictional story – Final Departure.  The characters were deliberately developed to embody the qualities of those who believe and those who have no faith. Their ideas and statements represent a distillation of historical documents, the research and writings of countless others, and actual citations from the Bible.

Many will disagree with what I have to say.  Others will say I have only touched on the myriad of profound questions surrounding the nature of man, our earth, our universe and our Creator.  Guilty as charged.  My goal is to open your eyes, to cause you to question the status quo, and stimulate you to seek more information on your own.  If I can at least motivate you to adjust your attitude toward accepting the possibility that God does exist, then I will have accomplished my mission.