The Book is Done, but the Author’s Not Finished
Sunday, January 28, 2018 by Jeff Walton 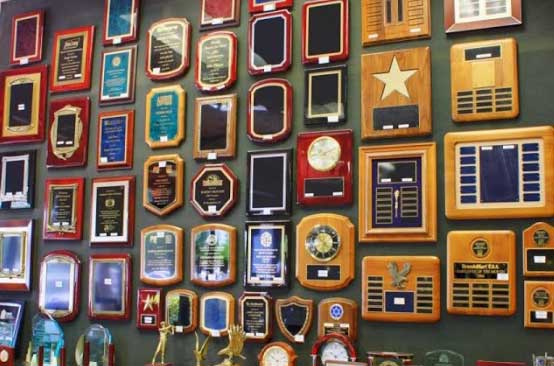 I have a confession to make.  I have an I-Love-Me wall in my home. Actually,  I’ve turned almost all four walls of my in-home office into an altar to myself.  Plagues, certificates, photographs, and mementos from fellow government agencies and foreign counterparts.  Now I’m adding framed book awards.

Not that there’s anything wrong with displaying academic and professional credentials – particularly in a place of business such a doctor’s office.  And yes, displaying reminders of missions accomplished – particularly in the service of your country - is not inherently an act of vanity.  But the truth is I put those wall hangings there to partly bolster my ego.  I put them up to help me define myself and to give me a sense of self-worth.

What’s the point of all this?  One of the biggest moral shortcomings I see in myself and some baby-boomers in general is pride. To my generation, rugged individualism, self-sufficiency, and personal achievements are all considered hallmarks of success and something to be admired and encouraged.  But they can cause problems too. God didn’t create us to worship others or ourselves – only him.

Did Simon and Garfunkel’s I am a Rock have it right? I’ve learned the hard way that an overreliance on one’s own abilities can all lead to unintended consequences. Isolation, arrogance, and cynicism to name a few.  When we think we have all the answers, we stopping asking others for advice and help.  We live in our own echo chamber where we constantly confirm that our way is the right way.  Sadly, many times it is not. We fail to grow and mature in important ways. We become our own role model.

If we have complete faith in our own abilities, then why should we appeal to a higher power for help?  Why should we seek the strength and grace of Father God when we can do it all ourselves?

Who get’s it right? According to the late C.S. Lewis, the moral failing that is the greatest evil is pride. It separates us from God.  Pride was the vice that caused Lucifer’s downfall and his becoming the devil.  In my case, pride was the most difficult personal flaw to identify.  I needed a trusted confidant to break the news to me gently.

I bring this up because pride nearly caused my downfall before God found a way to get my attention and bring me back to reality.  I wasted decades in my self-constructed cocoon of self-reliance.  I wish someone would have pulled me aside years ago and whispered in my ear the harsh but necessary truth – you can’t worship God when you’re worshiping yourself.  Someone finally did, but only after I had done much damage to myself and others.

Will the one really worthy of worship please stand up? My role model now?  Jesus Christ.  As Matthew 11 tells us, Jesus was gentle and humble in heart.  Yet the Bible also reveals he was shrewd, brave, open to others, and patient while being unbelievably strong in character.  Not to mention the fact that he could perform miracles.  Even secular historians who wrote about Christ’s life documented that he was a wise man and a doer of wonderful works.  Great qualities to emulate, particularly when we consider he was God in human form.  Someone worthy of worship.